Lambert Creations, a century of emotion 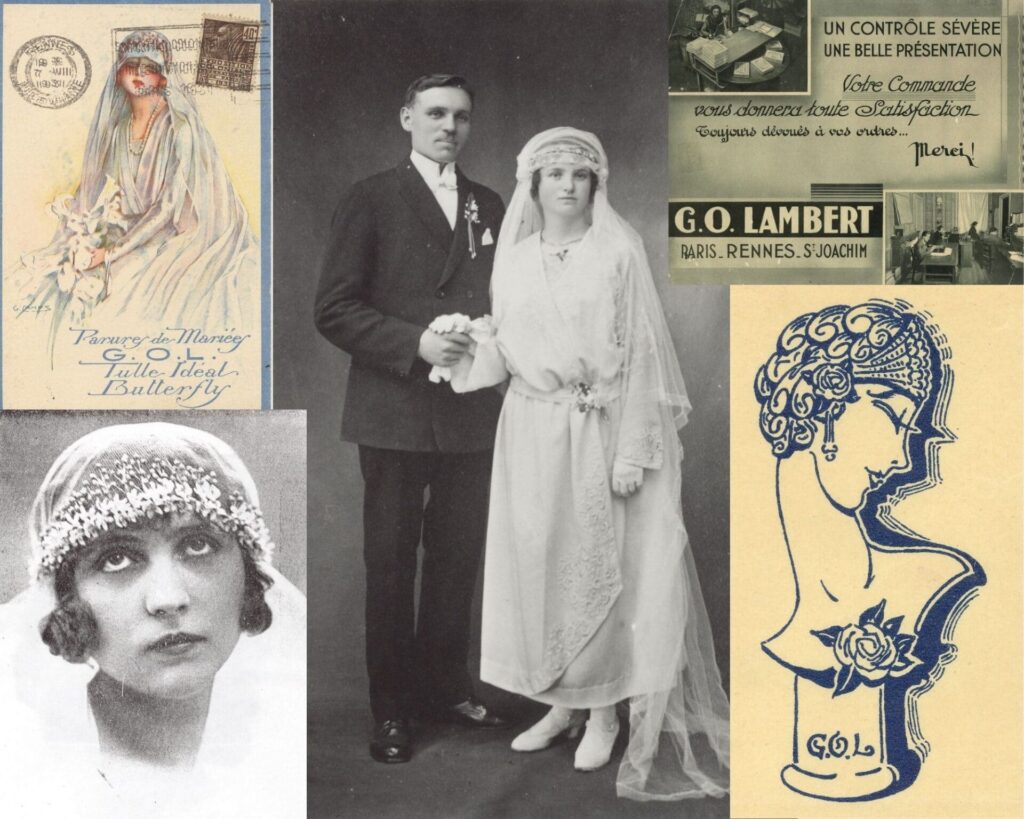 At the beginning, the making of floral wreaths for brides

From its earliest days, Lambert Créations has written its history in the nuptial world and more particularly in the making of wreaths for brides.

Originally, the accessory is made from natural flowers, a symbol of virginity, fertility and innocence. But the strong enthusiasm known in Europe at the end of the 19th century will favor its realization with replicas in fabrics and wax. Among the many workshops for making artificial flowers on French territory, that of Georges Octave Lambert stands out as a reference recognized throughout the world.

The workers “florists” of the workshop of Saint-Joachim, near Saint Nazaire, busied themselves with the manufacture of the meticulous éléments, while in Rennes, the wreaths were assembled before sending them in cardboard boxes to the effigy of the prestigious brand.

Its influence reaches the major European capitals such as Paris, London and Brussels, Saint Petersburg or Constantinople, and then the United States, North Africa, South America or Australia.

It is even claimed that the bouquets of the bridesmaids of Queen Elisabeth II were fashioned by the Lambert factory.

But the dark times of the 1930s, the advent of the artificial plastic flower as well as the vagaries of fashion will slow down activity. Little by little, the requirements of tradition will give way to new desires that will make you forget the romantic orange blossoms and their workshops.

Nevertheless, this first page in the history of Lambert Créations already defines the fundamentals that will stand the test of time : the requirement for quality, refinement, and the love of beauty.

The G.O. Lambert artificial flower factory in Rennes in the 1930s

Forty years later, 25,000 tiaras and as many bridal bouquets were still made there each year.

40 kilometers of tulle and around 400 kilos of pearls are needed to make hundreds of thousands of flowers. Wax objects will gradually be replaced by plastic. The activity will last until the 1980s.

The wedding dress, the second breath of Lambert Creations

From the adornment of artificial flowers to the wedding dress, there is ultimately only one step that the vision of Michel Vignes combined with the creativity of his wife Sissy made it possible to successfully cross.

When he took over the Ateliers Georges-Octave Lambert in 1962, the young entrepreneur knew his subject well : right-hand man of the eponymous founder since 1957, he actively participated in the modernization of the activity.

The transition to the wedding dress will definitely take place at the end of the 60s.

Sissy Vignes deploys a finely thought-out universe in which French elegance is illustrated with poetry and emotion. A seamstress by training, passionate about travel and romantic stories, she expresses in her wedding dress collections a personal interpretation of the past and elsewhere.

Very quickly, her dresses with French charm would meet with lasting success: the first salon in London near Oxford Street, where 153 dresses would find buyers in two days! This episode marks the beginning of a success story that will intensify over the course of Michel Vignes’ travels in Scandinavia, South Africa, the United States and Japan where the postulate of a French and artisanal confection remains an unstoppable argument.

The years 2000 opened a new dynamic for Lambert Creations

After the boom years, of which the year 2000 marks the climax with 305,000 weddings celebrated in France, the wedding world is undergoing a profound metamorphosis.

This is both economic and societal: the creation of the civil solidarity pact (PACS), the changeover to the euro, the proliferation of specialist wedding brands, the massive arrival of import dresses at low prices, the Internet development is impacting the sector and Lambert Creations must once again adapt to that development.

In 2004, it was as a family that Manuëla, Hervé and Roland Coulombel took over the brand.

Very aware of the stakes, they began to modernize this “sleeping beauty” by rethinking its strategic positioning on the market.

With deep respect for the heritage of Lambert Créations and the know-how of its little hands that have made it famous, those committed entrepreneurs are reviewing the organization of the production tool at the same time as they are developing the marketing approach. : the style of the collections is being redesigned with renowned and talented designers, the brand image is modernized with sustained communication.

Another ambition: to develop the brand’s distribution network in France and internationally.

Seventeen years later, Lambert Créations has almost doubled its workforce with 25 people. It is present in a network of nearly 200 multi-brand stores in France and around the world.

For 100 years, combining the heritage of exceptional know-how with an innovative and virtuoso vision, Lambert Creations has continued to celebrate the grace of brides over time.

Esprit Couture and Manufacturing Excellence since 1920

No products in the cart.

We use cookies on our website to give you the most relevant experience by remembering your preferences and repeat visits. By clicking “Accept All”, you consent to the use of ALL the cookies. However, you may visit "Cookie Settings" to provide a controlled consent.
Cookie SettingsAccept All
Manage consent

This website uses cookies to improve your experience while you navigate through the website. Out of these, the cookies that are categorized as necessary are stored on your browser as they are essential for the working of basic functionalities of the website. We also use third-party cookies that help us analyze and understand how you use this website. These cookies will be stored in your browser only with your consent. You also have the option to opt-out of these cookies. But opting out of some of these cookies may affect your browsing experience.
SAVE & ACCEPT